Section IV: Beyond to Mars and the Asteroids

This section extends the basic infrastructure developed to support small outposts at L1 and the lunar surface for the purpose of expanding a human presence into the inner solar system, visiting the Earth-Sun Lagrange points (L1 and L2), Near Earth Asteroids (NEA) and Mars.

Once the infrastructure detailed in Section III is in place, human spaceflight beyond the earth-moon system requires very little additional technology or hardware development.  This section describes vehicle designs and mission profiles based on Section III developments with the probable addition of a Prometheus Program derived 100kw electric nuclear power plant.  For the purposes of this blueprint, this device is assumed to mass 6mt, including power interfaces and shielding suitable for crewed operations.  The nuclear plant is suitable for low-impulse orbital transfers (assumed in this document to be xenon ion-based at 3,800 isp - essentially 20+ Boeing 25cm XIPS thrusters) and for power generation for a Mars surface station.  Use of solar power generation is an alternative to this power source at comparable weight, but it will require 320 m2 surface area and constant sunlight, possible for deep space propulsion, but questionable for extended Martian surface operations.  And obviously, the effectiveness of a solar-based solution will be degraded (by over 50%) at Mars orbit, where most of the propulsive energy envisioned in this section is needed.

The base vehicle for operations beyond the moon is the Interplanetary Transfer Vehicle (ITV).  It will carry a crew of three for a period of up to 1,000 days in a space comparable to that of the completed lunar base.  Assembled at L1 by two "Heavy" launches, the ITV carries both "Quick" (Aquila CH4/O2) engines to provide 600 m/s impulses to leave L1 in short order or to quickly break or circularize orbits as necessary, and "Cruise" engines, providing over 3,000 m/s delta v over a period of months via nuclear powered ion propulsion.  The base vehicle is described below.

This craft, with a full load of 19.2mt of consumables launched by two "Heavy" boosters, is capable of a Mars orbital mission, using 500 "Quick" m/s to leave L1 on a 259 day Hohmann transfer orbit to Mars.  At Mars, it will use its aeroshield and some "Cruise" fuel to establish orbit around Mars for 455 days.  During the last 200 days in orbit, the ITV will slowing build up "Cruise" velocity for a 259 day return to Earth, where the aeroshield would help establish an elliptical orbit suitable for an Aquila rendezvous to return the crew to Earth.  Additional "Cruise" fuel transferred from the Aquila would allow the ITV to return to L1 within a matter of months, ready for refitting to support a new mission.

Obviously, a pure orbital mission to Mars would be of limited utility, though it may allow the remote control of automated rovers on the surface.  The configuration above is best suited to pure deep space missions, where a single "Heavy" cargo launch could provide "Cruise" fuel and supplies for a leisurely 6-12 month journey to and from the Earth-Sun L1 or L2 points for the purpose of satellite repair or upgrading.  This mission profile is the best method for maintaining proposed systems like the Webb telescope.

An obvious extension of the Earth-Sun LaGrange mission profile would include a Utility Pod with the ITV to allow for the approach and landing on small (less than 50 km diameter) asteroid bodies.  The 3mt Pod attached to this profile would have been launched as part of the two "Heavy" missions that delivered the 17.4mt base ITV to L1.

Supplied by two "Heavy" launches, the vehicle described above could be suitable for a number of 1-3 year missions to Near Earth Asteroids or a Mars Moon mission, an extension of the Mars Orbital Mission described above, with excursions to Phobos and Deimos from the Pod as the ITV spins slowly out of Mars orbit.

Four "Heavy" missions would deliver the Lander and outfit the ITV to carry a larger aeroshield and support the larger mission mass.

Note that the "Cruise" delta V is computed on return mass (no Lander) and actually supports a considerable margin, since at least nine months of consumables will be expended before the Trans Earth impulse begins.  Consumables for a full 1,000 days support the contingency of a failed Mars Habitat delivery or a Prometheus failure prior to Mars aerobrake that would require following a free return to Earth.  It also allows the crew to hold out in Mars orbit until the next Hohmann window in the event of failures that prevent a return to Earth.

The Lunar Lander requires only minor modifications to support a Mars mission.  An aerobrake shield and parachute system will negate the need for most of the landing impulse, with under 100 m/s of delta v allocated for a deorbit burn and 400 m/s allocated for final touchdown near the Mars Habitat landing site.  A nose cone shroud is the only addition for the return to orbit, with 4,450 m/s delta v allocated to achieving Mars orbit and a rendezvous with the Mars ITV.

Note that ascent mass is used to calculate the delta v potential of the vehicle, as only the deorbit burn will occur before the jettisoning of the aeroshield and parachutes.

The Lander is not intended for extended operations, but could attempt a "sprint" three day surface mission if the Mars Habitat was lost or damaged during its Mars landing.  Stripped of its main engines, tanks and structure and with RCS fuel replenished, the Lander could also support short excursion to the Martian moons as the ITV slowly spirals out from Mars on its return to Earth.

Martian surface crews will use the Mars Habitat for extended exploration of the planet's surface. Essentially a modified ITV equipped with a Rover and additional CH4/O2 engines and equipment for landing, it serves as shelter and lab for a crew of three Martian explorers.

Four "Heavy" launches will deliver and supply the Habitat at L1 from where it would begin its independent voyage to Mars within the same window of the Mars ITV launch.  The six "Quick" engines provide initial impulse for departing L1 and for braking during final descent at Mars.  The reactor will provide power, even through month-long dust storms, and aid a quick recharge of the Rover fuel cell system.  Supplied for over two years, it could support a crew until the next Hohmann window even if their Lander were damaged on descent or failed to start for ascent.

A surface mission as envisioned in this section would last only 7-10 months, with the crew ascending to Mars orbit as the ITV began to spiral out for its return voyage.  As such, a subsequent expedition could make use of an existing Habitat and its supplies as their base if their Habitat were damaged or destroyed en route.

The following chart outlines a ten year interplanetary program utilizing two ITV vehicles and four Mars Landers and Habitats. It envisions six missions: one to an Earth-Sun LaGrange Point, one to a Near Earth Asteroid and four to the surface of Mars.


Including the final return of Mars Expedition #4 in Year 13, this plan requires 50 "Heavy" launches, though never more than 6 per year, comparable to the lunar program detailed in Section III.  Ideally, Year 1 of this plan will correspond to the year 2013, with the first Mars Expedition occurring in 2016 (Year 4). All crew and "Return ITV" launches will use an Aquila spaceplane for transfer.

The above plan for Section IV illustrates a minimum interplanetary program aimed at delivering four crews to Mars. Additional ITV vehicles can support continuing LaGrange and Near Earth Asteroid Missions.  With some modifications, it could support a Venus orbital mission, though not a surface mission to Mercury - with no atmosphere to provide braking, the total delta v requirements would bee too high for all but a flyby mission and even that would involve the risk of a very high radiation exposure for the crew.

Operations after the tenth year of this Section fall outside the scope of this blueprint.  Hopefully a nuclear thermal rocket solution or an advanced plasma/fusion drive can replace both the "Quick" and "Cruise" engines adopted for this plan and larger expeditions can depart from L1 to explore the inner solar system and to continue the exploration of Mars. 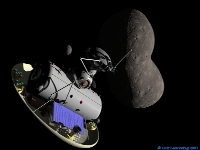 All pages and images ©1999 - 2005 by Geir Lanesskog, All Right Reserved
Usage Policy